BBNaija season 7 Viewers were left dazed and shocked after a video of housemates, Daniella and Khalid moving aggressively under the duvet, went viral on social media.

Hours after the live eviction show which saw the first two housemates, Christy O and Cyph to be evicted from the Big Brother house, there was a moment of passion between lovebirds, Daniella and Khalid under the sheets.

As one will have it, moral policing Nigerians and Critics went hard on the lovebirds as they reacted to the trending video.

Reacting to the criticism that trailed the video, Pere accused those criticizing the couple of exhibiting “self righteousness”. He also said they are not better than the housemates. 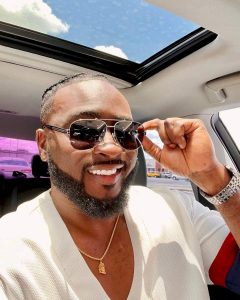 Nigerians stop criticizing Daniella and Khalid! Self righteousness! Just stop it. Let them be. You ain’t better than them

BBNaija: “You’re The Love Of My Life And I Want Your Family To Know How Well I Treat You” – Sheggz To Bella (Video)

Chomzy Speaks On Possibility Of Relationship With Groovy (Video)