Nigerian afrobeat star, Wizkid has reacted after his former manager, Banky W expressed disappointment over his absence at his wedding.

The singer made this known in an interview with Ebuka Obi-Uchendu where he revealed that it came as a bit of shock for him while justifying his reasons for missing the party.

In reaction, Wizkid took to Twitter, he retweeted the video with the reply “LOL”.
See screenshot below: 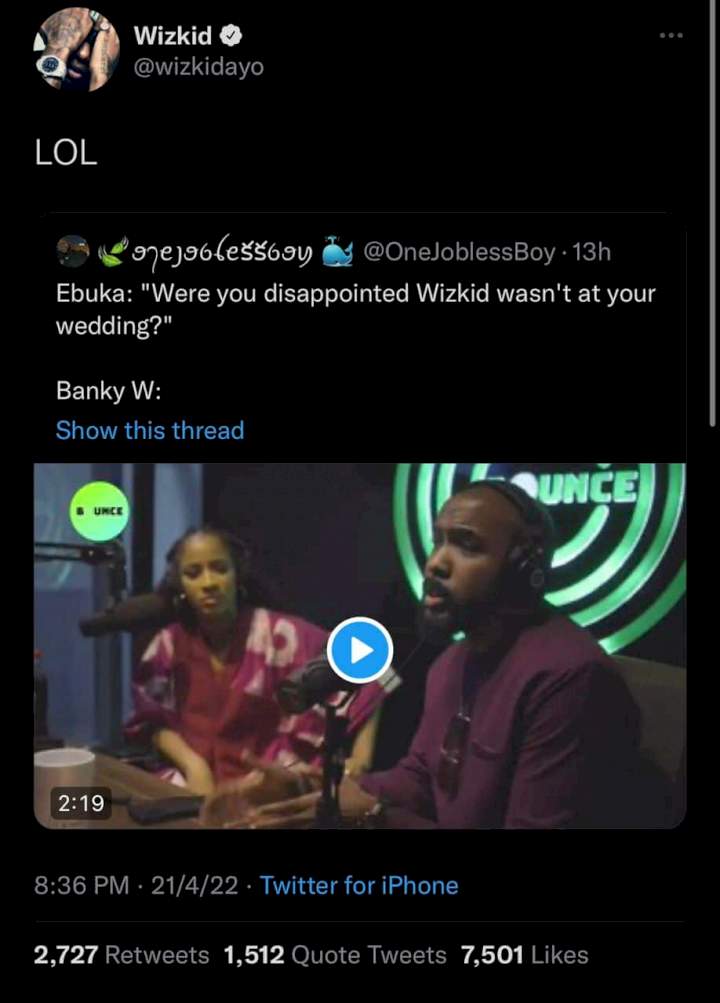 In the interview, Banky also addressed Wizkid’s exit from EME record label. He claims Wizkid left the label without fullfilling his part in the contract.
“I think it was a 5 album deal and he had done 2 solo albums… I think he still owed 3 more albums but he wanted to leave. And for me, that was enough because I don’t want anybody to stay where they want to stay.” he said.
Wizkid signed a record deal with Banky W’s Empire Mates Entertainment (E.M.E) in 2009.
He released two albums ‘StarBoy’ and ‘Ayo’ under the record label.
He left the label in 2014.
Drop your comments below!!!

“I Can’t Talk Money With You If You Haven’t Made $100M This Year” – Burna Boy Disses Wizkid, He Responds

“So Fake, Trying To Use Davido’s Name To Promote His Upcoming Album” – Wizkid Dragged After Professing Love For Davido (Video)