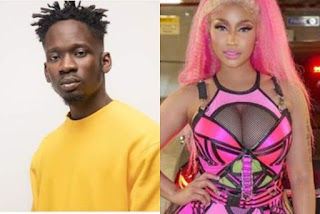 Mr Eazi has confirmed that he has a collaboration with, J Blavin and Nicki Minaj.
Mr Eazi made the news when he was featured alongside Davido and Tiwa Savage on the May edition of the Billboard Magazine. Billboard hinted in the interview with the three singers that the Banku singer had a collaboration with the American rapper and J Balvin that would be released soon. Mr Eazi, who last year made his Coachella debut and toured with J Balvin, is also preparing an upcoming EP as well as a collaboration with Major Lazer and Nicki Minaj.
A fan who came across the news posted it on Twitter and the singer confirmed the news and revealed that the song would soon be out but did not disclose when the song would be released or the name of the song. “Normal level Jah willing soonest Drop”