A 32-year-old Congolese, identified as Luwizo, awed the whole world as he weds triplet sisters named Natalie, Nadege, and Natasha all in one day.

The man, Luwizo claimed he first met Natalie on Facebook and fell in love with her after chatting for a while.
He also revealed that after going on a date with Natalie, she introduced him to her sisters: Nadege and Natasha, and they fell in love with him too.
In Luwizo’s words, how he felt when he first met Natalie’s identical sisters:
“I was very much surprised that I almost fainted. It seems like I was dreaming!
Even though people considered it impossible for three women to share one husband, to us, sharing everything has been our life since childhood.”

Luwizo added that although his parents didn’t approve of the weddingand did not attend, he has no regrets whatsoever getting married to all three sisters. 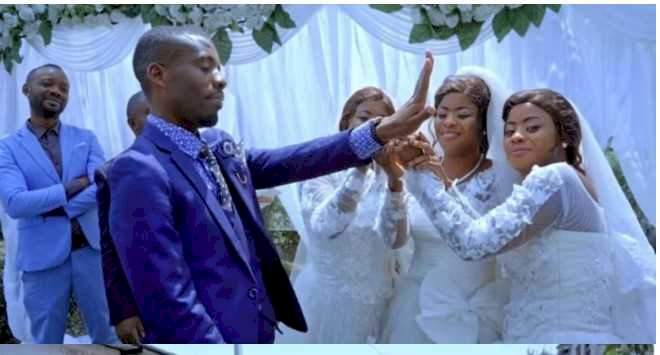 “You have to lose something in order to gain another. In addition, one has their preferences and their own way of doing things. So I’m happy to marry the triplets no matter what others think. My parents despised my decision and that’s why they didn’t attend my wedding. But all I can say is love has no limits,” he said.