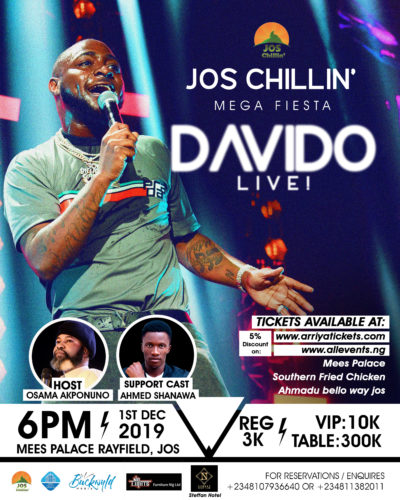 Davido who will be visiting the cold city for the first time. He joins an elite list of stars including 2Baba, Falz, Harrysongz, MI Abaga, Alex Ekubo, Jeremiah Gyang, Ice Prince and many more who have graced the stage at the biggest and most consistent concert brand in the northern half of Nigeria.

Jos Chillin’ Mega Fiesta: Davido Live! takes place at 360 entertainment centre, Mees Palace on the 1st of December, 2019, barely 11 months after the last edition, making it the first time the concert will hold twice in one year.

Ace comedian Osama Akponuno will be on ground to hold it down and thrill the fans as host and brand ambassador.

Tickets for this premium event is available at Mees Palace cinema at 3k-Regular, 10k-VIP and 300k-Table.

Jos Chillin’ is a tourism promotion and human capital development initiative of Mees Palace and Buckwyld Media, in partnership with Plateau State Government.

The Event will be covered by onemusicnaijablog.