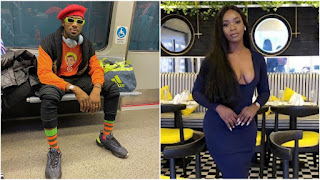 The Nigerian Inspector-General of Police, Mohammed Adamu has ordered the immediate investigation of the policemen who arrested  D’banj’s alleged rape accuser, Seyitan Babatayo.
According to Seyitan, policemen pretending to be delivery men stormed her house and had her arrested after she revealed that she was raped by the singer. D’Banj was then probed by the inspector general of police in Abuja and Seyitan was made to send her statement from Lagos because she couldn’t afford to travel to Abuja.
According to Pulse NG, in a letter written by the Inspector General of Police, all policemen involved in the arrest must be probed. The letter titled, ‘Re: Petition Against Inspector Abraham, Supol Ugowe and the Entire Police Officers Team at Ikeja, Lagos Division of the Inspector General of Police’ the IGP asked that the petition from Seyitan Babatayo’s lawyer be addressed.
The petition from Babatayo’s legal representative, Ojoge, Omileye, and Partners alleges that the policemen attached to the Intelligence Response Team arrested Seyitan on D’Banj’s orders and detained her for over 24 hours. It was also stated that they denied her access to her phone and her lawyers and she was subjected to intimidation and psychological torture by the policemen.
“According to our client, she was told to write a statement denying ever meeting with Mr. Oyebanjo (D’Banj) and to also state that she lied against the person of Mr. Oyebanjo. In actual fact, our client was about to write the statement which she believed would be a basis for her release when the counsel came in and stopped her from writing such a statement.
The counsel further informed the policemen that all actions to the alleged rape of our client in December 2018 by Mr. Oyebanjo have been transferred to the DIG FCID for a thorough investigation and that they need to stay the action. The petition also states that that D’Banj’s Manager, Damien Okoroafor who later came to the police station, instigated the police who then refused to release Babatayo.”

D’Banj Welcomes Baby Boy With Wife In The US

Don Jazzy Insists That He and D’Banj Never Had Any Issues, While Speaking On Relationships