Celebrity bar man and socialite, Cubana Chief Priest, has predicted about his friend and singer, Davido and his ex-fiancée, Chioma as he shares new loved-up video of them.

He mentioned this while sharing a video showing the former celebrity couple all loved-up at a club as they hung out with him and other celebrities. 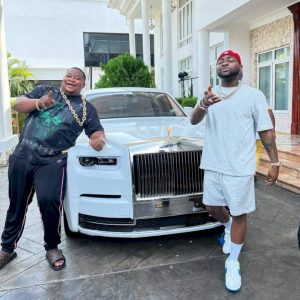 According to the businessman, with the way things are going, he is determined that Davido and Chioma, who already share a son together, will give birth to another child next year.

He went on to gush over the couple and how beautiful Chioma looked at the club, and seemingly hinted that the couple, who broke off their engagement in 2021, might rekindle their relationship and get married soon.

“I Dey Very Sure Say My Sister @thechefchi Go Born Another Pikin Next Year For @davido #Vision2023Assurance 2:0 %…..
As E Dey Sweet Us E Go Dey Pain Dem002 My Sister Too FineNoSuper”

Swipe to Watch the video below,

This seemingly buttresses speculations that the couple are back together as they were over the weekend spotted at an event all cozy and loved-up.

Chioma, who shares a son with the award winning singer, was spotted at his concert in Lagos rocking a 30BG customized pendant worth millions with the inscription “Chioma 002.”

A recent exchange between the duo on Chioma’s Instagram page also fanned rumors that they had reconciled and had their followers raving over the chemistry between them.

Davido Surprises His Daughter, Imade With A Dior Saddle Bag Worth N1.7 Million