Man cries out for help on how to overcome the temptation of the flesh over his daughter’s resemblance with his late wife.

According to the narration of a father who lost his wife during childbirth to their only child, the woman he married afterward gave birth to two kids; one of which has a striking resemblance with his late wife.

The father who already confessed to molesting his daughter cries out for help on how to delete thoughts and intents of immorality before it he crosses the line with his own daughter.

Read the full narration below …

“I need therapy. I don’t want to cross my boundaries with my daughter.
Good morning. At this point, I think I need help. After the death of my wife many years ago. I remarried after 6years. My wife died giving birth to our son. That’s the only child I have with my late wife.
My current wife gave birth to two kids. A boy and a girl. My girl child looks and behaves so much like my ex wife. People are saying my ex wife reincarnated and came back to me. Because of that, I love her more than all my children.
We play a lot. She’s 18years. I touch her indecently but she sees it as father and daughter play. Nurse chioma, the truth is that I enjoy molesting her and later on I mastuuuurbate with d memory and her image. It has gotten to a point now than I have this unresistible urge to sleep with her.
I don’t want this but the urge is increasing everyday. She has finished secondary and waiting to enter university. We are both always at home alone. Please how do I kill this urge. I don’t want to do something crazy. Please post and hide my identity.
Ceetee, I see my late wife in my daughter and each time I’m playing with her, the urge is always there. I love my late wife and I miss her so much. I transferred all my feelings to my daughter. I treat her better than my other children.
If the whole family is traveling, my daughter sits by my side and my wife goes to the back sit. My wife has fought me for that but seeing that she’s wasting her time, she accepted it. I really need help nurse chioma.” 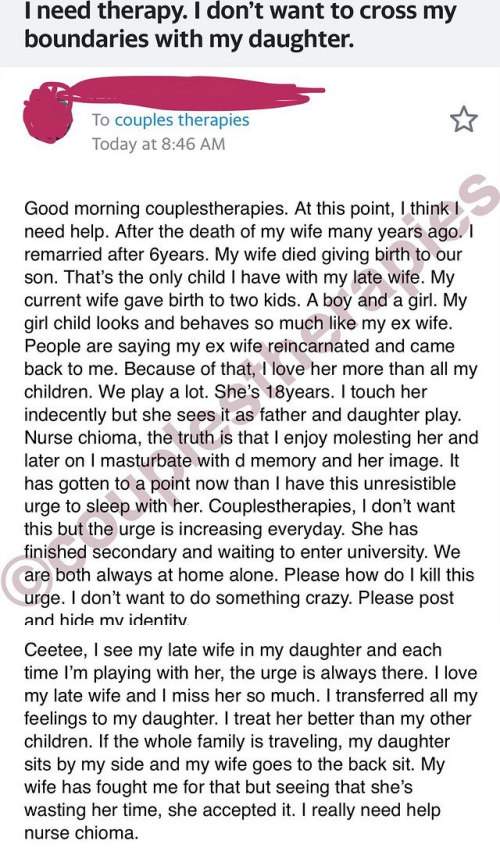