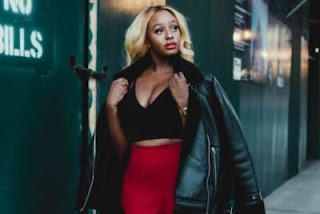 Nigerian disk jockey, Cuppy, has ended a six years relationship with London Football club Arsenal FC.
The “Gelato” crooner had taken to her Twitter page a day before the match to announce that she would leave the club if they should loose their match against Brighton. “If @Arsenal lose today, NOBODY on Twitter should beg me to stay o! ? #BHAARS #COYG”


If @Arsenal lose today, NOBODY on Twitter should beg me to stay o! 😤 #BHAARS #COYG

Unfortunately, Arsenal conceded two late goals to lose against Brighton handing them their second defeat since the restart of the English Premier League (EPL). Cuppy, expressed her disappointment over the loss while stating that she could no longer stay in a “toxic” relationship with the club.

It’s not me, it’s you 💔 Only so much heartbreak a girl can take @Arsenal… I can no longer stay in this toxic relationship. I’m sorry. pic.twitter.com/xekOV44TTW