Cardi B Makes Up With Offset After Filing For Divorce, Says She Missed His D*ck 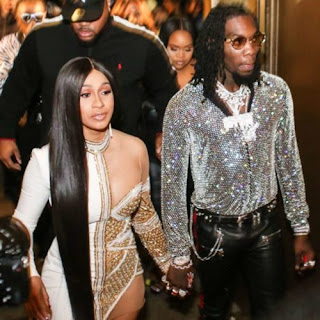 American rapper, Cardi B has reconciled with her husband, Offset, she explains why.

Cardi B who had filed for divorce from Offset back in September due to reasons she later made public via social media. However, after Offset gifted her a Rolls Royce birthday on her birthday, there have been rumors of their reconciliation.
Cardi B via her Instagram talked about their reconciliation. According to her, they are just two young people who got married very early, and are not different from other dysfunctional couples, and are just getting their way around marriage. Cardi B also wrote that she missed her best friend and really wanted some d*ck.
In her words: “Listen y’all, I’m just a crazy bitch. You know how I be arguing with y’all on social media? That’s exactly how we are, between me and my man. So when people be saying I be doing s–t for attention, with this and that, no, I’m just a crazy b*tch,” she said. One day I’m happy, the next day I wanna beat a n**ga up. I just be starting to miss [him]…
It’s hard not to talk to your best friend. It’s really hard not to talk to your best friend. And it’s really hard to have no d–k. People been saying that I took him back like I’m materialistic. I do like material things, I like material things and everything, but I just didn’t … What do you want me to do? The n—a gave me a Rolls-Royce and I snub him?,”
And I really wanted some d–k for my birthday,” she added. “We’re just really typical, two young motherf—as who got married early, that’s what we are. We’re not no different than y’all f—in’ dysfunctional-a– relationships. We’re the same way. We’re just more public,”

Shocking!!! Cardi B Reveals She was Sexually Harassed By A Photographer During A Shoot

Cardi B Gives Birth To Her Second Child With Rapper Offset